It is interesting to see how families adjust to expansion. Each of our children showed eagerness to become a big sister or big brother. Quickly realizing that the new arrival would be taking some of my attention away from them. They needed to figure out their place in the family and learn that a new baby does not change everything. Pets are similar. With our new puppies, Kitty has gone through a few stages of adjustment. Fear, curiosity, defensiveness, acceptance. I worried about her at first, but once she made it clear to Koda and Summer that it was her house, with some clear body language and a loud hiss, they backed off. Now they are a little afraid of her, unsure but respectful of her authority. Kitty’s story of how she came into our family deserves telling.

It was September 11, 2002. All morning long the television aired the tragic events of one year before. The painful wound reopened at the images on the screen in our kitchen in Texas. We had just moved from the Northeast in July 2001. My television news station was still airing the local New York station because it was satellite and I hadn’t yet gotten around to changing it. I think I liked the link to my more familiar part of the country. So each morning I had coffee with Matt and Katie in their time zone. I was watching when the first plane hit the World Trade Center. All the way from Texas in a new town where I had yet to make friends, I mourned for my commuter city, Ridgefield, Connecticut. I remember crying as I talked to a painter we had at our house.

One year later, on the anniversary, my heart was heavy. This particular morning I had my 5 year old and 2 year old at home. In an effort to find something to smile about, I took them to one of their favorite things to do, to pet puppies. Our pet store had many puppies in low windows that we would often visit. If we had time we would go into a petting stall and the pet store employee would bring us a puppy to pet. It was a cubicle. We would get a little love session in with an adorable puppy and then be on our way.

My sons and I pet several puppies. Then to distract them from their cries of wanting to bring one home with us, I suggested we go look at the kittens. Cats of various colors and sizes were in the different compartments. That’s when I spotted her. She was a small grey, brown and black tabby. Her eyes met mine. She mewed. I put my hand to the glass and she pressed against it. I quickly asked if we could pet her in one of the stalls. He brought her out to us and she was tiny and sweet, and affectionate. I was smiling on a day that few people were smiling. I just knew that this kitten was meant to come home with us. I paid $89 and we brought her home. She was worth every penny!

We brought her into our house without any preparation or planning. I picked up a litter box and cat food on our way out of the pet store. All that was easy. The hard part was going to be telling my husband who was not a cat-lover. He was out of town on business, our phone conversation went something like this.
“Hon, I did something impulsive today.”
“Oh yeah, like what?”
“Um, I got a kitten.”
“I don’t think I heard you right. A cat?”
“No, a kitten.”

After the initial shock, he grew to love this new addition to our family. It was our first pet for the kids (other than Godzilla the iguana). We decided on the name “Liberty.” We called her Liberty at first, and then somewhere along the way she became “Kitty.” Our sweet Kitty has been with us for almost fifteen years, three houses and one temporary living condo. Kitty is an indoor cat. She is a hunter who will prowl the hallway with a single sock in her mouth, like a fresh catch of wildlife. She welcomed dot our Aussie, and taught her all the house rules. They played together and rested together near the sunny windows. Last August, she comforted us as we grieved for Dot. She missed Dot too. Kitty is my calm. She sits on my lap when I am reading. She curls into a ball at the edge of our bed between us.

I am relieved that bringing home two energetic puppies has not rocked Kitty’s world too much. If I could read her mind I think her first words were, “Are you kidding me? I’m too old for this.” Then she remembered her role in the family, to be my calm. She sits atop the sofa, relaxed but tail swishing, eyes closing and opening, sending the message loud and clear to the puppies. Keep calm and carry on. 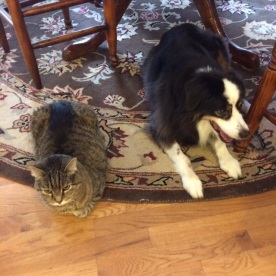