I am generally not one to write and share about negative things. Why bring someone else down with complaining? So be forewarned: I am about to launch into a blast of negativity to get something off of my chest.

We have two puppies. Two litter mates. Two exactly the same age and the same time in the same house puppies. Before we even saw the litter, we had in our minds that we wanted two puppies. We prepared and got very excited to bring home our two aussiedoodles, Koda and Summer.

So why do some people feel the need to tell me, right in front of my two pup siblings, that it was the worst decision we could make? It’s happened several times in the last month. First it was a man in the waiting area at the vet. He approached me sitting there with my tiny babies in the carrier. At first he seemed kind and knowledgable about dogs. He said he fostered puppy litters. This was just two days after bringing ours home, and I was understandably naive and eager to accept any tips on puppy care. This man flat out told me it was a big mistake to take in two puppies from the same litter, and added that as a rule he never adopts two puppies he fosters to the same home. Ok, thanks for that. I simply asked him to explain why. He went on to tell me how awful things can get, where the sibling puppies can fight so badly that separate homes are needed. Ok, thanks again for that helpful information.

Inside the examining room the nurses and the veterinarian said nothing of the kind. They offered congratulations and were all about happily welcoming our newest PAIR of family members. The same was true for the ladies out in the front desk, who wanted to hold them and take pictures. It was not hard for me to dismiss that outspoken man in the waiting room as rude. Who cares what he thinks. But then this week it happened again. I was caught off guard because it came from a place I would not have anticipated. At the end of our first puppy socialization class the dog trainer mentioned she had a great article for me about litter mates. I was excited to take any advice she had for training and raising Koda and Summer. I took the printout home and thanked her for a great first class.

Things were busy that evening so I was not able to read it until the next morning. Wow. It was not what I had expected. Four double-sided pages outlining all of the reasons litter mates should not be raised together in the same household. It even went so far as to suggest rehoming one of the puppies to avoid catastrophic events from occurring. Wow. My GrizzlyBearMa defensiveness began growling as I digested this. Now, I am not so naive that I don’t realize that there is truth to the advice about needing to give separate training and experiences for positive development of the individual puppies. It makes sense that each puppy needs one on one attention. But I have difficulty seeing how detrimental it is for these two to snuggle, play with one another, and live in the same household.

The biggest beef I have with these negative nellies is that WE ALREADY HAVE OUR TWO PUPPIES! It’s not as if I reached out to them in advance for their experienced opinion. Koda and Summer were right there. It reminds me of the obnoxious comments from judgey women at the grocery store who would look at me with a toddler fussing in the cart, and two small children. “My, you have your hands full!” Then my daughter piped up, “And Mommy has a baby in her tummy!” Head shaking, tsk, tsk, tsk. I tried not to let that kind of thing bother me then and I will try not to let this littermate shaming bother me now. I believe this trainer was trying to be helpful; I just wish more than two paragraphs of the eight pages had offered suggestions.

A visit from a couple girlfriends last night helped remind me not to listen to those naysayers. They are both experienced multi-dog owners who agreed that whether from the same litter or not, dogs bond with each other and with the humans as a family. My friends reinforced what I know in my mother’s gut. I am doing everything I can to love, to teach, and to care for Koda and Summer. So to those that have a differing opinion of a decision that we ALREADY MADE, please keep it to yourself.

Rant is over. Going into the yard now to play with my two Aussiedoodle litter-mates. 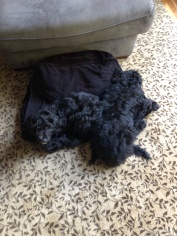