A new milestone has been reached, Koda lost a tooth! Koda actually lost two teeth. Two long sharp puppy canines. The vet asked me if I had found any teeth on the carpet at our last appointment. I had not, so I have been on the lookout for lost teeth. Summer and Koda are used to me touching their mouths a lot. From day one I have tried to handle them and brush their furry coats often. It is supposed to make them comfortable with groomers and vets. The groomers loved the pups, and the vet appointments all went smoothly. So I guess my constant touching has been effective.

Losing a baby tooth was always such a big deal when I was a kid and when our children were little. It is far more fun than losing a tooth in older age. Poor Kitty lost a tooth a few months ago. Now she has a lopsided smile and breaths louder. I did not find her lost fang like I did Koda’s, so no tooth fairy for Kitty.

The tooth fairy was always big in my childhood and no different for my kids. I remember wiggling a tooth for days until it finally came out, then running my tongue through the empty space. Then that same night we would place the tiny tooth under my pillow. I don’t know why I was so excited about the coin that would be found in the tooth’s place the next morning. Maybe it was my imagination of a sparkly white fairy drifting into my room; I never thought to question the magical visitor above my bed. As I did with Santa Claus and the Easter Bunny, I continued to believe until some older kid at school or my own older sisters opened the curtain revealing the truth.

Sadly, I learned what was real and what was not, and I grew up. Then came the fun of creating these magical beliefs for our own children. Santa Claus and Easter Bunny are fun and easy. Aside from the chore of filling 4 dozen plastic eggs with jelly beans and hiding them out in the dewy garden early in the morning or shopping, wrapping and assembling toys late at night for four lucky kids, those magical traditions are ones we continue to keep up even now.

The tooth fairy job was actually harder than one would think. First there is the rising value of a tooth. When I was a kid, it was a dime for a front tooth, and maybe a quarter for the large molar. Somehow three decades later kids are getting silver dollars or stacks of quarters, or even bills. The next difficult part was the tooth fairy visit and exchange. Tip-toeing into the dark room, we would ever so gently slide our hand under the soft pillow inches away from the cheek of the sleeping child, then blindly feel around for the tooth to make the exchange. More often than not the child was not yet asleep so we made up some excuse of an extra kiss goodnight, or sometimes the tooth couldn’t be found so easily. The last part that was critical was actually remembering to do the tooth money exchange. There was more than one occasion where we forgot. The next morning our son came running in and said with sadness, “She didn’t come! The tooth fairy didn’t come last night!” My eyes popped open and I jumped up and followed him into his room, grabbing the stack of quarters that I meant to stick under his pillow the previous night. “Are you sure you looked everywhere?” We tossed around his sheets and pillows and I somehow snuck the stack of gleaming coins into the pillow case. He found them with delight! Phew! He did wonder why she also left the tooth for him. Our oldest child once left the tooth fairy a note asking her a question. The fun thing about the magic of the tooth fairy is that is lasts about as long as the baby-teeth-losing stage lasts (kindergarten to second grade). I’m not sure the wisdom teeth surgically removed would have gotten visits from the tooth fairy. Although one of my kids did ask.

Koda has two teeth to put under his pillow tonight. What will the tooth fairy bring to him? 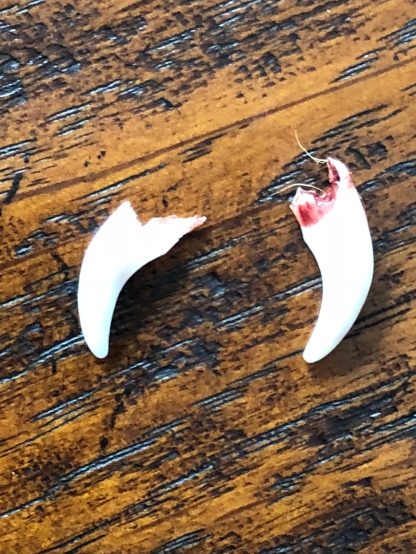